The Vikings and the Viking Age

Who Think you know your Vikings? Get the lowdown with these historical facts:

THEY DID NOT CALL THEMSELVES VIKINGS

While we do not know exactly what they referred to themselves as, the term Vikings is a 19th century phrase. At the time of the Vikings, other nations referred to them as Norse, Norsemen and Danes. While those who travelled eastward, mostly Swedes in the beginning, called themselves "rus", which is the origin to the name of Russia.

Despite popular belief, Vikings never wore horned helmets. Christians in contemporary Europe added the detail to make the Vikings look even more barbarian and pagan, with horns like Satan’s on their helmets.

THEY WERE KNOWN FOR GOOD PERSONAL HYGIENE

In fact, excavators have found that Viking era grooming tools were some of the most commonly used of all Viking tools.

Powerful ships have always been associated with Vikings, and this is because they did indeed know how to build excellent ships, which were a key component to their various military and invasion successes. Their most commonly used boats were "longboats" which were not only able to fit as many as 60 Vikings at a time but were also designed to be able to land on and depart from land easily.

Just as in today's society, being blonde was highly desired. So much so that brunette Viking men had tactics for lightening their manes. One method involved using a strong soap with a high lye content to bleach their hair.

THE DAYS OF THE WEEK ARE NAMED AFTER VIKING GODS

Did you know that all our days of the week, except one, are named after gods worshipped by Vikings?

Monday – Máni, God of the Moon

Tuesday – Tyr, God of War and God of the Skies

Wednesday – Odin or old English Wōden, The all father God

Saturday – Saturn, God of Agriculture (because they didn’t bath)

THE VIKINGS DID DISCOVER AMERICA

Did you know that the Norwegian Icelandic Viking Leiv Eiriksson discovered America 492 years before Christopher Columbus?

Several popular words we use today have Viking origins. Snort, lump, scrawny and anger all have their roots in Old Norse language. Here are some xamples how it happened.

The Vikings had an own word "husbonde", for a man having his own house (hus), family and even being a farmer (bonde). The English adopted husbonde, todays husband.

The Vikings had leather sacks called "bag" filled with beer. When empty they threw it away. The English picked it up, opened the top, put on a shoulder strap, carrying things in it, calling it a bag as well.

The Vikings travelled to the east and the west getting "frende" everywhere. The English sterted to use the very same word "frende" but as in todays Friend.

EVEN VIKING WOMEN HAD SOME RIGHTS

While Viking men and women certainly weren't treated as equals, Viking women did have some basic rights. These included being able to inherit property and request a divorce.

THEY HAD UNIQUE FUNERAL CEREMONIES

When a prominent Viking died, they were given a grand send-off via a funeral service that involved laying the deceased on a boat with their clothes, animals and jewellery, setting it on fire and pushing it out to sea. When the richest died, they were put in huge burial mounds along with ships, horses, wagons, slaves and equipment they would need on the "other side".

Ref. Excavations from the Osberg ship and the Gokstad ship.

Vikings were all about physical strength and were known to abandon sickly children. Abandonment methods included leaving them alone in the wildnerness and throwing them into the sea. 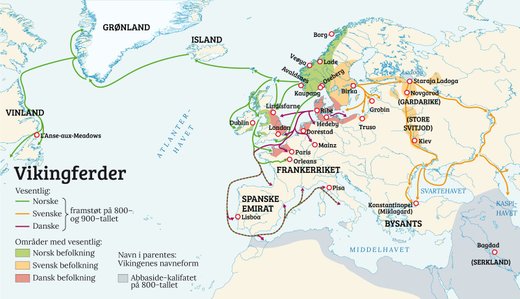