A steaming heat hits the four men as the oak door opens. The heat in the sauna is a welcome change from the sad rain outside, and the men sigh of well-being as they sink into the tubs with hot water. Soon the calm falls over the bathing cabin, while the men scrub their skin, comb their hair and carefully cleanse both nails and ears.

It may have been like this when the Scandinavian Vikings bathed every “lørdag” (Saturday). The word "lørdag" comes from Old Norse "lugardagr", which simply means bathing day. The term is one of many examples that the Vikings lay far ahead of their time when it came to be interested in personal hygiene and personal appearance.

At this time washing with soap and water was an extravagant luxury, very few Europeans unearthed. They used perfume, yes lots of perfume to lower the worst sweat smell instead of washing themselves, which was very common even among clergy, royalties and nobility.

Popular culture's idea of dirty, unhuman Viking warriors with bad body odour, appearance and behaviour like an evil bull, does not hold. In relation to people in the rest of Europe, the Vikings were fashion conscious, handsome men with charm, self-confidence and nice hair. Scandinavians were simply Europe's cleanest.

The Vikings tried to get well at all times. Even the month-long raids they pulled out were no obstacles. For example, Swedish Vikings in 907 entered into a peace agreement with the Byzantine empire after decades of bloody fights. The agreement meant, among other things, that the Vikings had unrestricted access to all bathing facilities when their ships added to the empire's ports.

Nevertheless - 14 years later, the Arab envoy Ibn Fadlan met a group of Viking merchants by the Volga River. The Arabs noticed that a slave girl picked up a washbasin of water every morning. She gave it to her master, who "washed himself and the hair, and combed the hair into the washbasin, then he cheat his nose and spat in it." When the man was finished, the slave again handed the washbasin to the rest of the men doing the same. Ibn Fadlan looked in contempt at the washing ritual, calling the Nordic men "the filthiest of all the creatures of Allah". As a Muslim, he was used to wash in clean water five times a day before today's prayers, at least hands and feets. But actually, the daily washing of the vikings was very unusual compared to Europeans of the day, who often only took a bath once or twice a year.

Furthermore, dirt meant sadness. If a viking failed to have soap and water in the hair, it was a sign of sadness. When God Balder was killed, his brother Vale failed, according to the myths of the vikings, to wash his hair and hands until he had revenged the murder. This may also have had a major impact on the Vikings. 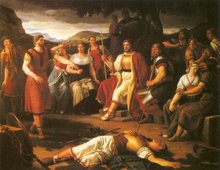 Their urge to embellish themselves almost bound to obsession in contemporary eyes - and the Scandinavians actually went so far as to adopt laws as protected personal hygiene.

According to the medieval Icelandic law collection "Grågås" it was punishable to throw dirt on another to mock him. The same was true if a man pushed a viking into "water, urine, food or mud" for whatever reason he had to humiliate the other party.

However, a few hundred years after the greatness of the Vikings, cleanliness went out of fashion again in Scandinavia. And around 1500, European doctors began to spread the idea that water could lead to plague. The perception lasted for almost 300 years. But the legacy of the clean and well-dressed Vikings did not die completely: The higher societies were still diligent users of beautiful hairstyles, beauty remedies and fashion clothes.

The first written reports of the Vikings, apart from the Viking's own sagas, were written by Christian monks in England in the late 700's. The monks were often attacked by the Vikings because they did not try to protect themselves or their property as men, but stabbed away or expected to be killed. The hard advances of the skandinavians therefore caused the monks to create a picture of them as bloodthirsty, unclean and dirty barbarians - and who would not write the same if anyone came and stole all your goods and gold.

Today, however, historians know that most Vikings were well-groomed and lived peacefully side by side with the Englishmen. Even though the Vikings went on brutal raids, they had a sophisticated culture around poetry and storytelling. 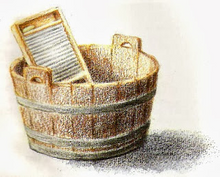 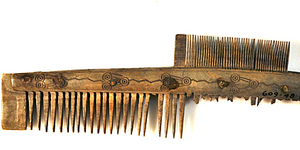 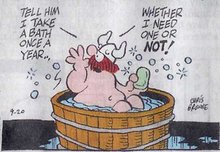